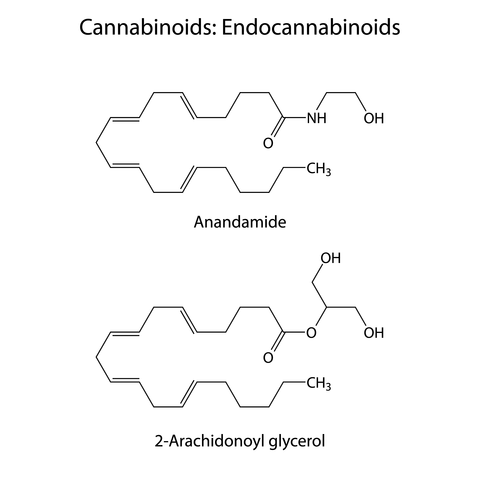 Endocannabinoid deficiency refers to a condition in the human body where an individual exhibits levels of endocannabinoids that are considered lower than what is essential to the promotion of health. Known as CECD, many researchers and medical professionals have formulated theories that the condition plays a key role in the following ailments:

Endocannabinoids are cannabinoids that are produced naturally by cells within the human body and interact with the endocannabinoid system (ECS). The intricate system of receptors can be found all over the human body, and as a modulating network, it helps regulate functions like appetite, pain sensation, mood, and memory.

For a healthy individual, the following enzymes and structures are responsible for the central roles in the ECS and have important jobs in moderating the above functions:

One of the biggest discoveries about the relationship between endocannabinoids and CECD, is that certain research studies have indicated lower levels of natural cannabinoids can lead to higher chances of developing migraines.

Researchers believe that anandamide controls certain receptors associated with migraines by interacting with a region in the brain known as the “migraine generator.” Through the inhibition of the enzyme FAAH, cannabinoids help boost the presence of anandamide. This indirectly helps regulate and communicate pain signals as well as spinal, peripheral, and gastrointestinal actions that play roles in a host of medical conditions.

Consuming CBD products is the best way to boost the levels of cannabinoids in your system, and it is a promising treatment method for CECD. Any of the good, reputable CBD products offered by My Health Etc. can theoretically help your body, but finding the right dosage amount can be tricky.

Unfortunately, because all our bodies are different, the perfect consumption rate does not exist. The ECS is well understood, but the way in which CBD oil interacts with these receptors is still being studied. Numerous factors are involved with determining the ideal dosage amount and consumption frequency that shouldn’t be ignored.

We always suggest to our customers to start off low and slow, gradually titrate up until you find your sweet spot, or the desired results. For more information go to our website under learn CBD and find our dosage chart for further guidance.